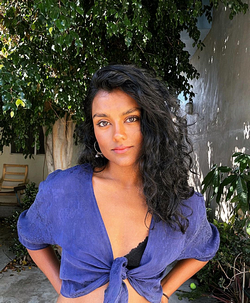 Simone Ashwini Pillai (known professionally as Simone Ashley) was born on March 30, 1995 to parents Latha and Gunasekharan. Both of her parents are Tamil Indian, and she has one older brother named Sean. Simone heralds from Camberley, Surrey but her family later moved to Beaconsfield, South Bucks whilst Ashley attended Redroofs Theatre School in Maidenhead, Berkshire for sixth form. She went on to graduate with a degree from Arts Educational School in London. Simone began modeling around 2013 when she was about the age of eighteen. She was signed to Star System (now System Agency) when she was 19 then later switched to Wilhelmina. As a model, it appears that Simone participated in modeling for several online clothing retailers, the most notable being ASOS and EverythingFivePounds. She was also in a feature for the magazine Ellements. Simone continued modeling until 2016 when she began her switch to acting.

One of Simone’s earliest acting roles was a short film called Millions. It was made for the 2015 Colchester 60 Hour Film Challenge. This was followed by guest appearances on series such as Wolfblood, Guilt, Broachchurch, C.B. Strike, and Inspector Coliandro. Simone also appeared in several movies, Ben Lyk (the girl) in Kill Ben Lyk was her most notable role. She also appeared in ITV’s thriller mini-series The Sister, playing Elise Fox. Simone’s biggest break would arguably come from Netflix wherein she appeared on the series Sex Education as Olivia Hanan and later was announced to be the female lead of the second season of Netflix’s huge hit Bridgerton. In February 2021, Deadline reported that Simone has been cast as Kate Sharma who will be the love interest of eldest Bridgerton brother, Anthony. Also, in 2021, Simone returned to her modeling roots, appearing in a Gucci x Harrods ad.