Vogue: Bridgerton’s Simone Ashley was never a fan of the period series

The second season of Bridgerton is finally here. Meet the new hero and heroine of everyone’s favourite period drama in this exclusive interview.

Bees are very significant in the world of Bridgerton. In the second season of this sexy, swoony, succulent Netflix series—so wildly popular, more than 82 million people churned through it the minute it was first released on, you gotta hand it to them, Christmas Day 2020—a bee is the first thing that you see, buzzing along the blossom-lined streets of Regency-era London. Bees are embroidered onto shirt collars; a bee sting is the means by which the family patriarch prematurely shuffled off this mortal coil. Or so believes eldest son Anthony (Jonathan Bailey), a soprano-wooing rake in season one and, now, levelling up to bona fide leading man status in Bridgerton’s sophomore offering.

There are also bees in a pearl-clutching moment in the second Bridgerton book by Julia Quinn, on which this season is based. About midway through that novel, a villainous insect lands upon the bosom of Kate Sheffield, or Kate Sharma, as she is called in the Netflix series, where she is played by Sex Education star Simone Ashley. Fearful that Kate has been grievously stung, Anthony—and here, my dear reader, I hope you are sitting down—swoops upon her heaving chest, rips open her bodice, puckers his lips and sucks the bee’s venom directly from its fleshy prison. Hello! It doesn’t get more Bridgerton than that. 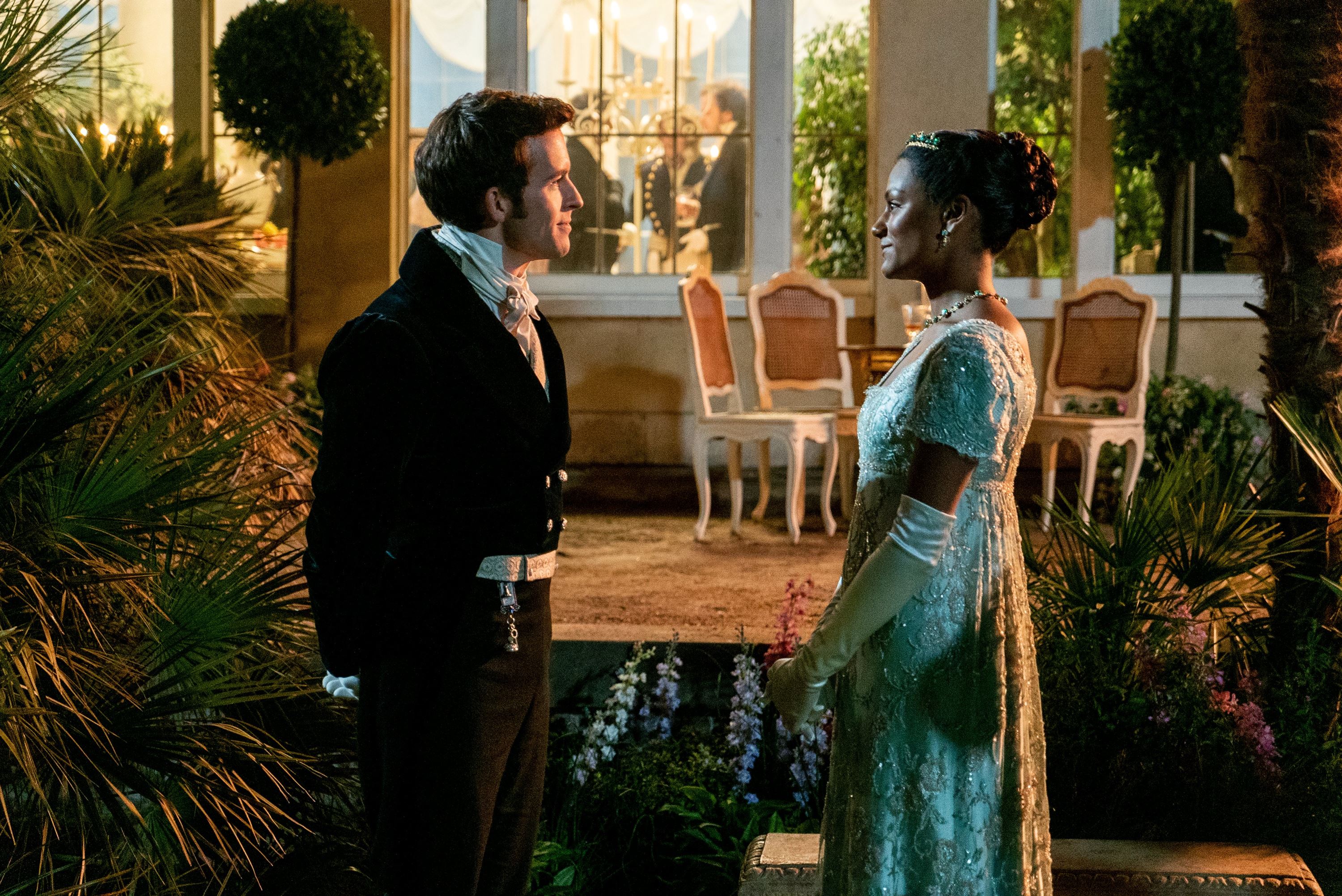 Oh Bridgerton how do we love thee? Let us count the ways. Because people do really love Bridgerton. They love its champagne pop and fizz, its rich seam of gossipy snark, its classical covers of Ariana Grande, its glossy sheen—so vibrant and saturated and alive; so very unlike the dusty costume dramas audiences were forced to subsist on until now. They love its ridiculously good-looking cast and unabashed horniness vis-a-vis said cast, in which the plot is mere window dressing for a series of ravishings on various chaise lounges. (See: episode six, season one.) You don’t become the basis for a TikTok musical unless people love your show. You don’t get an Instagram fan account—with 22,000 followers—created for a single two-second moment in which your star Regé-Jean Page licks an ice-cream spoon without deep, heartfelt adoration.

Without love, the news that Page would not be returning for season two—streaming on Netflix later this month—would have been nothing more than an online ripple, a mere drop in the ocean of the internet. Instead, it provoked worldwide outrage, social media despair and an anguished Change.org petition demanding for his return. (“I was really shocked, because usually that happens when I’ve killed off somebody that’s been around for a while,” Bridgerton’s producer Shonda Rhimes cheerfully told Vanity Fair.) “The impact the series has had around the world still astounds me,” admits creator Chris Van Dusen. “People have embraced this show on a level I can’t quite comprehend.”

New star Simone Ashley wasn’t one of the millions who binged Bridgerton when it was first released. The actor was too busy filming Sex Education, where she plays Olivia, the frostiest of high school cool girls. But she knew about Bridgerton, of course, because every morning while driving to set she listened to her co-stars drone on endlessly about Daphne and the Duke. “It was unavoidable,” she jokes. When she finally did watch the series, in preparation to audition in February of last year, she was drawn to one person more than anybody else. “Jonny,” Ashley grins. She’s talking about Bailey’s character Anthony, the outwardly stern, inwardly gooey, rumple-haired Viscount Bridgerton, who is introduced in season one in a way that can only be described as bottom first. (‘Viscount us in’, one headline leeringly declared.) “Many memorable scenes,” Ashley smirks. “So when I heard that I was auditioning for season two I was like, Oh, that guy.” Here, Bailey butts in: “The hairy one.”

The pair are speaking on a sunny London morning on Zoom from separate living rooms, on account of the novel coronavirus. But the genuine love and warmth between them transcends videoing technology; no wonder Van Dusen calls their chemistry “out of this world”. “I think viewers are in store for a really charged, scandalous and sweeping love story in season two,” he teases. They met in Ashley’s audition, pretending to be on horseback in a conference room in the middle of England’s second lockdown. It was the first time Bailey had left his bubble in months, and it was in the strange and elastic wake of Bridgerton’s immediate success, which catapulted him into internet superstardom. “Such an alarming and weird thing to know that everyone’s talking about it, but being locked down at the same time,” Bailey reflects. Even then, he knew that the role was Ashley’s to win. “I don’t know if I’ve ever told you this,” Bailey says while looking over to Ashley’s Zoom window, “but I had already thought of Simone.” Discussions around who would eventually play Kate began from day one, he shares. “By the time it got round to … ‘Look, we think we found a Kate, and we want to introduce you.’ They were like, ‘She’s called Simone,’ and I was like, ‘Simone Ashley from Sex Education! Yes!’” Before they met, Bailey dropped some emojis into Ashley’s Instagram DMs, by way of good luck, but “there was never another Kate”, he shares. “Simone knocked everyone off their feet.” 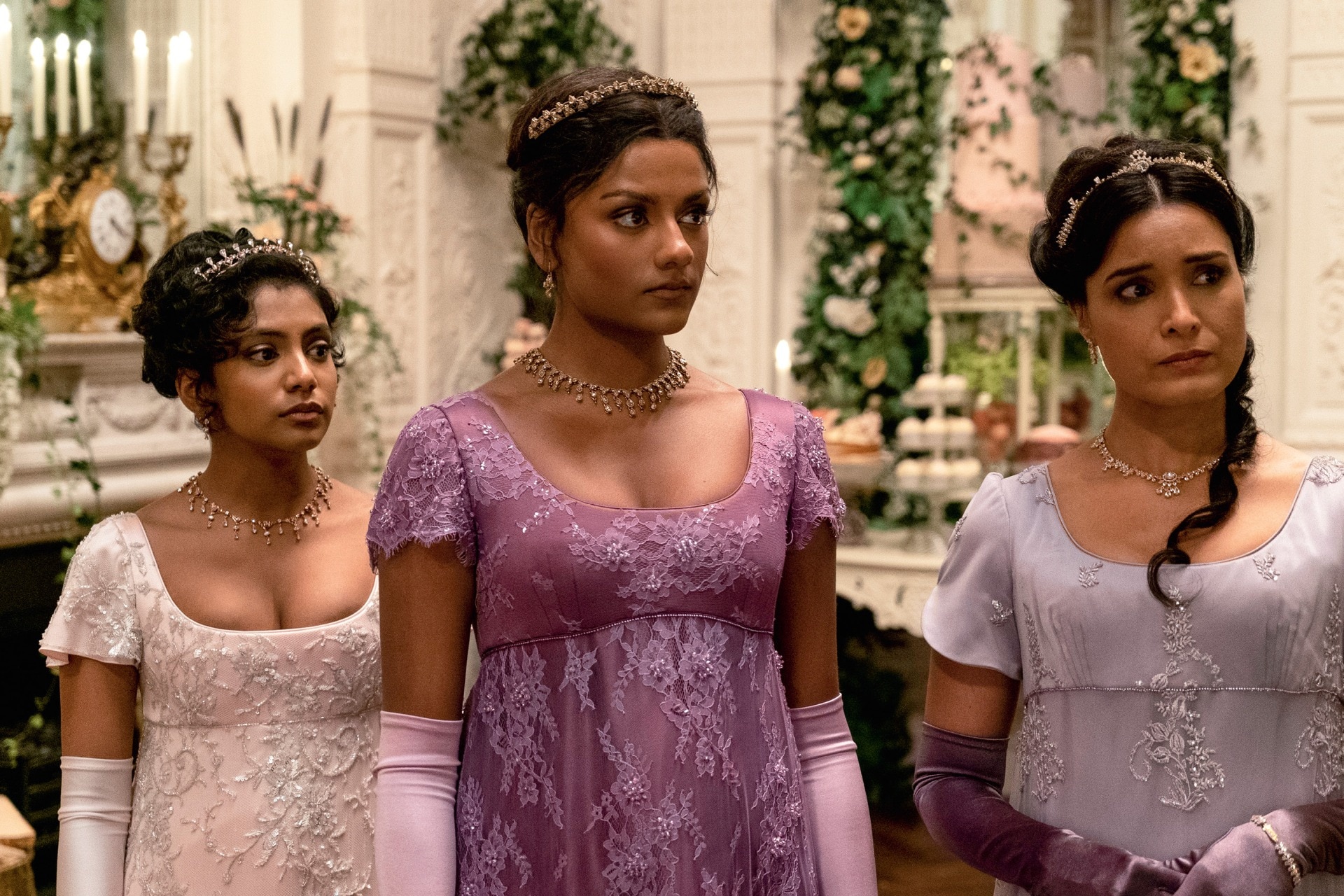 Kate is, just quietly, the best female character in the Bridgerton literary universe. She’s about as close to a Pride & Prejudice-esque Lizzie Bennett as the series gets, which probably makes Anthony Bridgerton Darcy. Deemed a spinster at the ripe old age of 26, Kate is intelligent, quick-witted and fiercely devoted to her sister Edwina, the diamond of the season. She is also, in this series, an Asian woman—Kate Sharma, not Sheffield, as she is in the books. “What I loved about the Sharmas is that they aren’t clueless,” Ashley shares. “They are three adult women who can take care of themselves, and are intelligent, and are brave, and also vulnerable.” For Asian women watching Bridgerton, this representation is everything, and in keeping with the show’s promise to break down barriers to inclusion. Culture writer Sarah Shaffi can’t wait, after seeing her reflection only in “nerdy Asian sidekick” and “oppressed woman” stereotypes in other series. “There will be a generation of young Asian women who will see their lives reflected on screen, albeit with more period dress, and a generation of older Asian women who will see someone they wished they had on screen when they were younger,” Shaffi says. “The effects of that reflection can’t be underestimated.”

For his part, Anthony enters this season a single man in possession of a good fortune desperately in want of a wife. “How hard can it be?” Anthony sniffs in the first episode. His requirements in a partner are thus: pleasing face, acceptable wit, genteel manner and absolutely nobody with whom he might fall deeply in love. (You can only imagine where this is going.) In Kate’s sister Edwina, radiant as a spring morning, he believes he has found the one. Not if Kate has anything to say about it—she is determined to protect Edwina from all manner of rakes.

“I needed an actress who could portray the fierce, take-no-prisoners side of Kate, but be vulnerable at the same time. And that’s Simone,” enthuses Van Dusen. “She’s a force to be reckoned with … Watching this season, you really root for Kate. You want Kate to put Anthony in his place, yet you also want her to fall in love—and I think that’s a testament to Simone’s incredible performance.” Ashley is “obviously extraordinary”, Bailey adds. “I was sort of spoiled, because we got to do all the intimate scenes together, so actually Anthony and Kate are sort of naked around each other, emotionally.” (And literally naked, too. This is Bridgerton, after all.) Ashley hopes audiences are ready to be wooed. “I think the entire world’s going to fall in love with Anthony,” she declares. “I think many hearts are going to be stolen.” 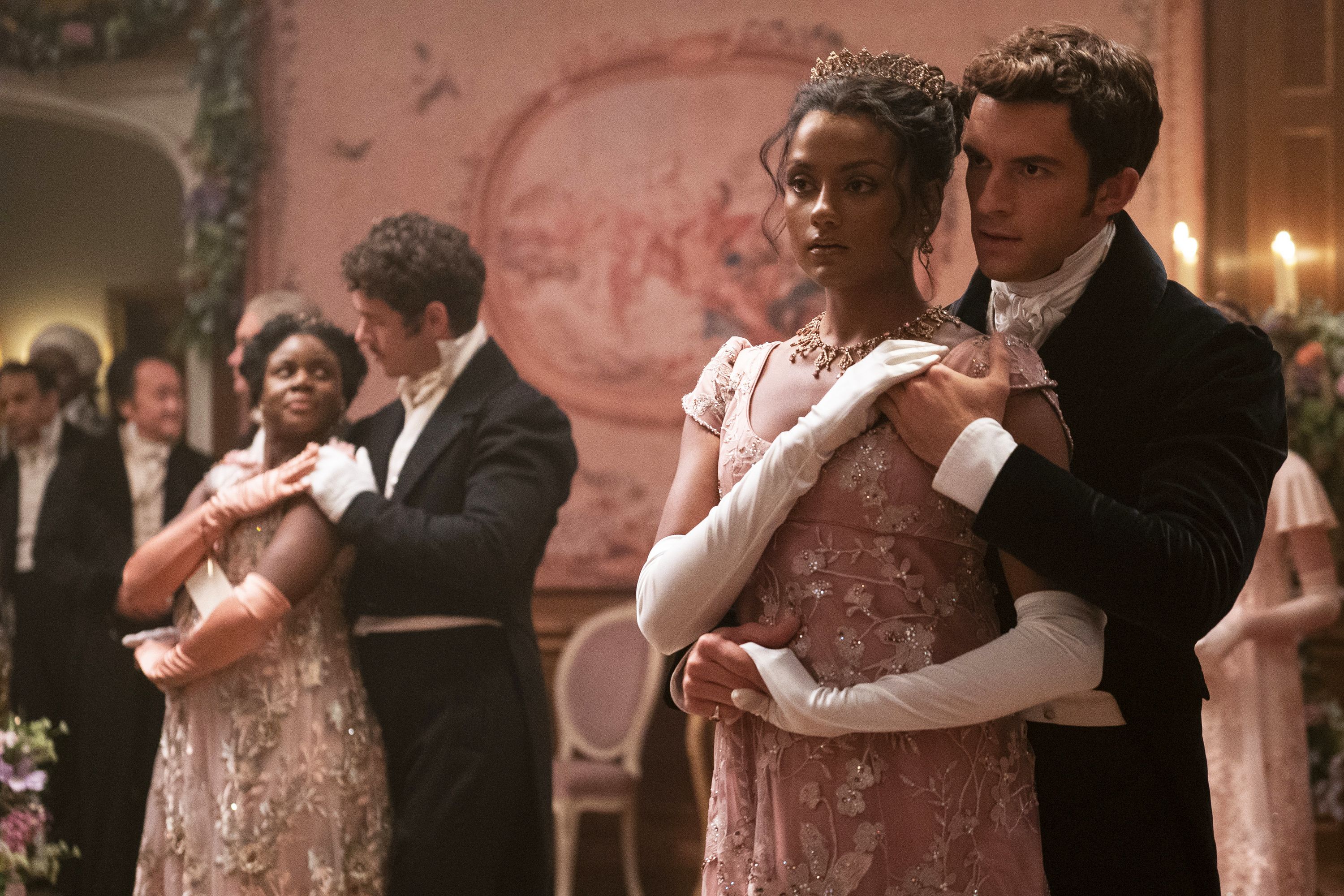 Reader, their chemistry is real. “I describe them as magnets,” Van Dusen muses. “There’s a palpable excitement between the two of them that you can feel on so many levels.” At first, just like Lizzie and Darcy, that magnetic force is all friction. But over time they realise that this spark between them, the one that frustrates and flummoxes and inflames, isn’t hatred after all, but something else entirely. “It’s a level of attraction that is extreme,” says Bailey. “When they’re out of their head and in their feelings you slowly start to notice the sync,” adds Ashley. “That’s so true,” Bailey responds. “Because it’s also like they go over enemy lines and then actually they become sort of addicted to the feeling of being alive, which is to be together.” By starting off as enemies, their end point as lovers is so rewarding. “They have to sit with themselves and choose love,” affirms Ashley.

The difference between Kate and Anthony and season one’s Daphne and Simon is all in the character of Kate; she comes into this relationship more confident and self-aware than Daphne ever was. “This is not a story about discovery in a way that series one was,” Bailey stresses. “I think there’s a worldliness to both of them.” It all makes for incredibly fun and, yes, sexy, television. And satisfying, too. The marriage plot is literally the oldest story in the book for a very good reason, and Kate and Anthony’s journey to happily ever after is one that is both familiar and foreign, tender and tidy. “People love love, and they love happy endings,” explains Dr Jodi McAlister, senior lecturer in writing, literature and culture at Deakin University. “Romance has a heightened appeal right now, when we’re in uncertain and scary times.”

And we haven’t even dug into the rest of season two: Eloise discovering feminism, Penelope’s attempts to hide her secret life, Colin returning from Greece with a fake tan and a silly little beard, the dishy—possibly nefarious—new Lord Featherington, a poetry-reciting suitor with very good hair for Edwina … All of that twinkly Bridgerton-y stuff that makes this show so addictive. “That’s kind of the brilliance of Bridgerton,” muses Billie Bhatia, the fashion writer who started @TheDukesSpoon, the viral Instagram account dedicated to, well, you know. “The scenes that are so jaw-dropping aren’t sex scenes in the rain or romping on the honeymoon bed, they’re these small intimate details that we’re all loving even more than the obvious scenes.”

In season two, there will be balls, there will be bachelors and by god—there better be bees. “There are loads of incredible scenes within the book. Some we may see, some we may not,” Ashley answers diplomatically. “But yes, we will see the bee sting scene.” Bailey grins. “You know that there’s a bee, buzzing around. We don’t know when it’ll hit.” That anticipation is all in service of Bridgerton’s ultimate goal: an epic romance worthy of the phrase bodice-ripper. “You watch Kate and Anthony go toe-to-toe throughout the season, and you just know that the ultimate payoff is going to be well worth it,” sums up Van Dusen. “And it is.”