The second season of Netflix’s record series arrives, with a new protagonist: Simone Ashley. She tells her what she learned about love by flirting…in the past 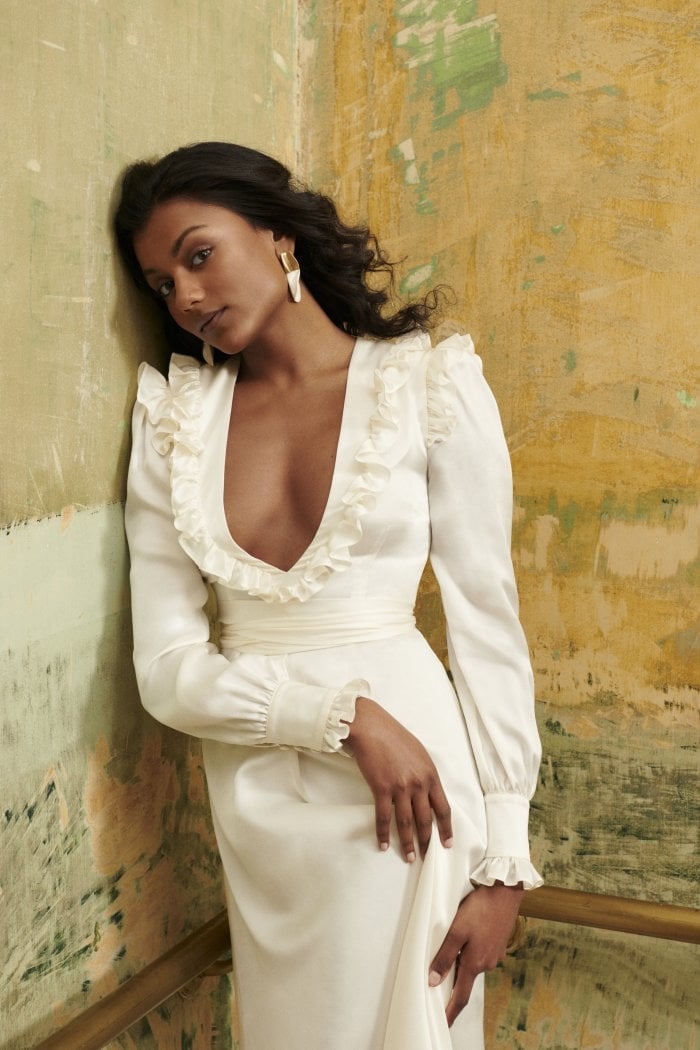 If you still don’t know Simone Ashley, a 26-year-old British actress of Indian descent, it’s just because you haven’t been paying attention. Placed on the Hollywood Reporter’s list of stars of tomorrow, she has so far made her mark in Detective Pikachu, the Sex Education series and even an episode of Inspector Coliandro. From March 25th, we will find her the protagonist of the second season of Bridgerton, the record series of Netflix produced by Shonda Rhimes and based on Julia Quinn’s romance novels set in Georgian England. Putting aside the relationship between Daphne and the Duke of Hastings, the new episodes focus on the love affairs of Anthony, viscount of Bridgerton (Jonathan Bailey), looking for a wife. Her meeting with Kate Sharma (Ashley), who has just arrived from India with her stepmother and younger sister Edwina, will upset his plans. “I was shooting Sex Education when the first season premiered, and everywhere I went, people were talking about nothing else. When I was entrusted with the role of Kate I had to keep the information only for myself: it was hard not to be able to confide in anyone, but I did it, ”she says excitedly.

Many of her colleagues have taken their first steps in film and television, acting in sumptuous costume dramas based on the classics of British literature. Did you, as a child, aspire to do the same type of path?
“For nothing! Not being a fan of the genre, she just didn’t fit in with the plans. I much prefer westerns and the works of authors like Quentin Tarantino, David Lynch and Wes Anderson, who have completely different styles, languages ​​and ways of telling a story. I grew up with Disney movies, which perhaps explains my somewhat childish imagination. I’m attracted to fairy tales that make you dream, that’s it.

Like the one between Anthony and Kate?
“Theirs isn’t exactly love at first sight: he’s looking for a woman to marry, while she’s not interested. At first they seem like sworn enemies, but the spark will be triggered ».

Was dating easier in the Regency decade than it is today?
“Maybe it was more magical: people couldn’t spend months hiding behind a screen, talking in a chat. The only option was to meet, which seems much more exciting to me than any long-distance communication. Having “experienced” the 19th century, at least on set, I recognize the advantages of dating in the modern era, but I think it would have been fascinating to fall in love at a time when love letters were still being sent. ”

Do you think that, between dating and social apps, we are losing a bit of mystery?
“No doubt! Even if it is then up to the individual to choose how much to reveal about himself or not “.

What limits do you set yourself?
“On Instagram (where he has half a million followers, ed) I only share what seems authentic to me. I especially like to be creative, I love taking pictures and shooting short video clips. But these are things I do only for personal pleasure. ”

Are there other people in the family who work in the entertainment world?
“My relatives are mostly academics, doctors, engineers and accountants, while I have always felt closer to the creative sectors. My father has always been a music lover and in our house the turntable sounded a lot rock’n’roll, I grew up singing. I studied in a musical school and, for a while, I also tested myself with opera ».

How did I take it?
«They trust me and have always supported me, but they were worried because there are no certainties or guarantees in this profession. But the thing is, you can’t spend your life doing what others want, you have to be your own hero. I’ve always been a bit rebellious and I feel privileged to be part of a generation that is breaking down stereotypes and in which women all over the world have more opportunities than in the past “.

Speaking of barriers: Bridgerton has a strong feminine gaze, tells about an inclusive society and focuses on the diversity of the cast. How do you respond to those who criticize the show of poor accuracy in terms of historical reconstruction?
“I’m thrilled to be part of a show like this, which is about real people with real problems. Regardless of their social status, the protagonists face challenges and difficulties that each of us has really had to deal with at some point in life ».

Kate knows what she wants and she is unwilling to let others define her. And she?
She is a splendid character, who begins a journey that will lead her to discover aspects of herself that she was not aware of. I believe that in general trusting one’s instincts is liberating and also makes our life easier ».

Is that one of her rules?
“Yup. It’s like when you turn up the volume of a song you’re listening to: at that point, just like music, your inner voice emerges and gets louder. I’m going through a very happy phase in life: if trusting instinct has brought me this far, then all I have to do is continue on my way”.