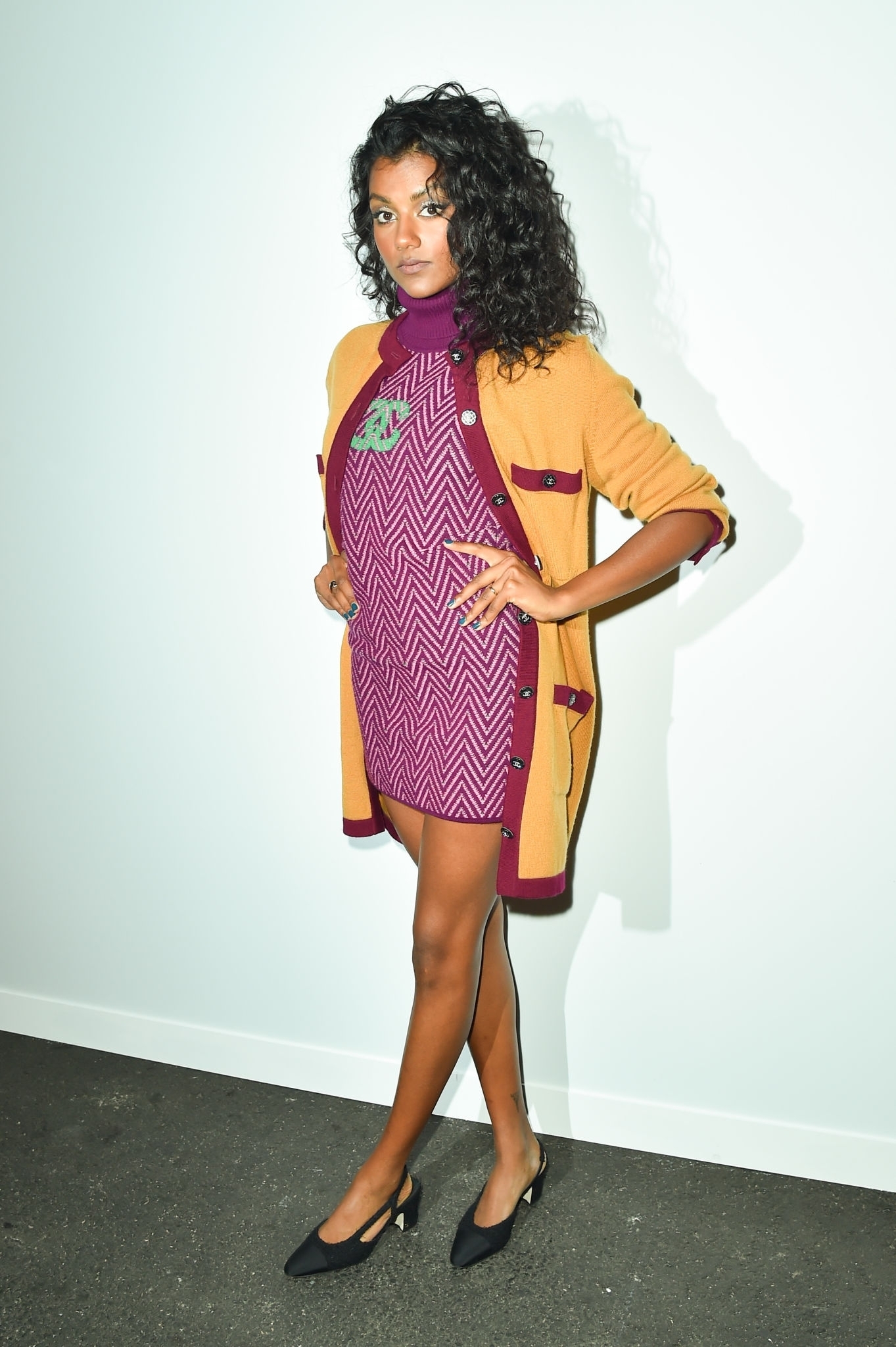 Simone Ashley has got this red carpet thing figured out. The 26-year-old star of Bridgerton may be a relative newcomer to the scene, but in the past year, she’s racked up a series of major style milestones, from taking her place in the front row at Prada and Chanel to standing out at one of the year’s biggest fashion events. For Ashley, the journey has been transformative. “This year has been a 180,” she says over the phone from Los Angeles. “I moved a lot, I traveled a lot, spent more time on my phone than I ever thought I would in my life! I managed to find my voice through all the taking emails, going to meetings, and reading scripts. I wasn’t shy or reserved before, but this year, I turned up the volume.”

Turning it up is an understatement. With a fragrance campaign for Loewe, an appearance in British Vogue, and plum roles on Netflix hits Sex Education and Bridgerton, Ashley is experiencing career lift-off—but one that’s allowed her to grow as a person, too. “We’re all in this industry because we want to entertain and inspire people,” she says. “I’ve been able to find the joy in [my work], and it’s freeing to have a sense of community, the confidence to express myself whether it’s in how I want to portray a character or what I choose to wear.”

Fans of Bridgerton will have to wait until 2022 to see Ashley’s heroine Kate Sharma, but she’s already joined the ranks of the series’ most stylish stars. Season one brought Phoebe Dynevor, Regé-Jean Page, and Nicola Coughlan into the fashion sphere, snagging plenty of campaigns and brand ambassador roles along the way. Still, even though she’s always been interested in style, Ashley has undergone a fashion education in the last few months. “There was a massive learning curve for me,” she says. “Just learning all the designers, exploring their oeuvres, and understanding what makes them unique. Once you know more about their voice, you think, ‘Well, what can be my voice, how am I going to use this [knowledge] to express myself?’’’

Growing up listening to Fleetwood Mac and admiring the free-spirited vibe of SoCal fashion, Ashley—who hails from Surrey, England—always felt like a California girl at heart. “I spent a lot of time in Ojai, where my family is from, so my vibe was bohemian and very inspired by Stevie Nicks,” says Ashley. “I’m a big summer girl, still figuring out how to dress for winters. I love the color of my skin, using moisturizer and highlighter so that it looks glowy, healthy, and chocolatey. I want to have my legs out, wear combat boots with a spaghetti strap mini-dress, or denim shorts with cowboy boots. For a long time, I dressed quite youthfully, but working with Rebecca [Corbin-Murray, Ashley’s stylist] has taught me so much.”

Ashley describes Corbin-Murray as less a stylist, and more a friend, mentor, and fashion resource, always ready to share advice. “Rebecca works from the inside out,” she explains. “She’s been incredible to work with because she encourages me, and everyone around her, to stay true to themselves. We skipped all those conversations of ‘What do you think will look better on me?’ or ‘What will make me feel less insecure at an event?’ and went straight to: ‘What is your truth and what do you want?’ Her philosophy is about finding the confidence within yourself and making sure you’re the best version of yourself.” 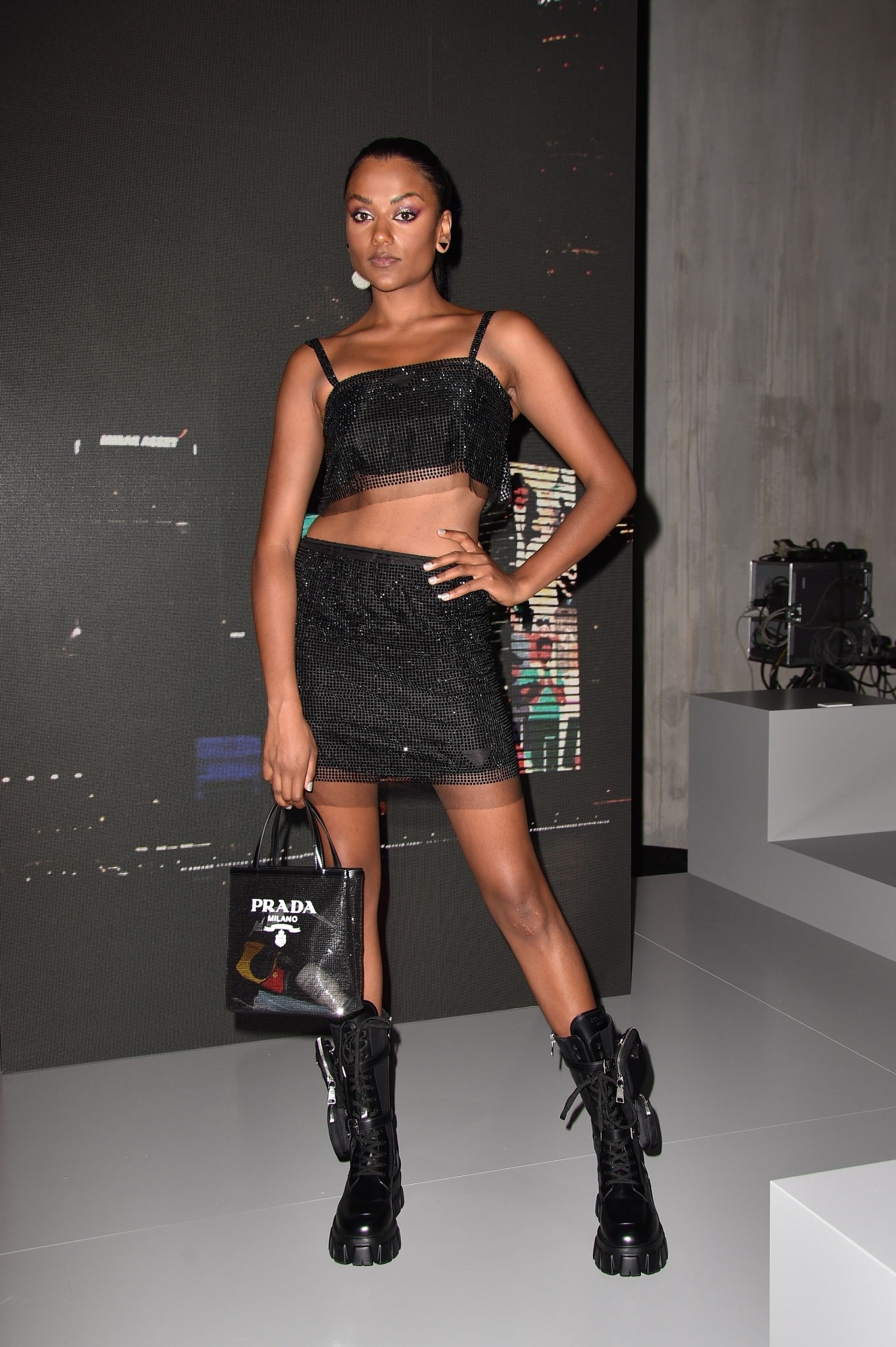 Focusing on the emotions fashion can evoke rather than keeping up with trends has allowed Ashley to experiment. This skill came in handy once fashion months started. “We were in the middle of filming for Bridgerton when I went to my first show, so I felt like I was accustomed to the madness of fashion week,” says Ashley. “Going to Milan for Prada was a great experience, and I loved my outfit for the show; a sparkly black mini-skirt, crop top, and combat boots. I didn’t grow up in a house where we wore designer clothing or would go shop at luxury fashion houses, so it’s been fun for me to try out things I hadn’t considered or never thought I could wear.”

The atmosphere of the front rows was equally exciting, especially at the globe-traversing Prada show which saw Miuccia Prada and Raf Simons’ collection debuting simultaneously in Milan and Shanghai. “Just seeing the way fashion and technology can bring us together as a community was exciting was fascinating,” says Ashley. “It’s a miracle that we’re still able to come together amidst a pandemic and celebrate fashion.” Chanel’s ’90s-inspired runway show this season, meanwhile, provided exquisite clothes and a few killer tracks. “I’m a massive music [fan], so I absolutely loved the soundtrack,” says Ashley. “There was a lot of George Michael, and [watching] was a liberating experience. The models were encouraged to strut down the catwalk and perform, to pose and smile, and just be themselves.”

Some of the finery Ashley viewed on the runway has carried its way into her wardrobe. The looks she and Corbin-Murray have selected for some of her latest events seem more Parisienne chic than Cali-cool. Take the custom AZ Factory top and skirt she wore for the Fashion Awards in London, a sleek combination that took the star out of her comfort zone. “That was the first time I’d attended the ceremony and the first time I’d ever had a look custom made for me,” says Ashley. “Norman [René Devera, AZ Factory design director] came in from Paris for my fitting, and he was just so wonderful to work with.”

Armed with a select series of references, Ashley had a specific mood in mind. “We wanted something that had an almost liquid texture when the light hit it to create that mermaid vibe,” she says. “During our conversations, a lot of the references that we pulled up were Cher looks [when she had] the super long hair. One, in particular, was a gown with asymmetrical cuts throughout that wrapped around her torso almost like a sari.” Worn with flowing curls by hair stylist Peter Lux and a bronzed beauty look by Alex Babsky, the final piece captured that spirit perfectly, its stomach-baring silhouette and minimalist design a breath of fresh air on a red carpet filled with glitter and print.

Off-duty, Ashley keeps things fairly simple, but she’s serious about her footwear. “I have so many boots it’s a bit of an obsession,” she says. “Doc Martens, Prada, Paris Texas—they make me feel like I can do anything. I love sneakers and flip-flops for comfort, but boots give me that boost. I walk into the room feeling proud and strong whenever I have them on.”

And though she’s still in the early stages of her fashion journey, Ashley fully understands the power clothing can have. “On set, the moment you put on a corset, it changes your posture,” she says. “You start to understand the way it shaped women’s behavior and lifestyle in the 18th century and hold yourself differently.” Of course, the impact of style isn’t limited to period attire, either. “We don’t always articulate the way wearing a certain nail color or accessory makes us feel, how it can change the way you carry yourself,” says Ashley. “My girlfriends and I always say that once you put on a little lipgloss and some hoops, you’re a different person; all of a sudden, you feel like you can get away with something.”